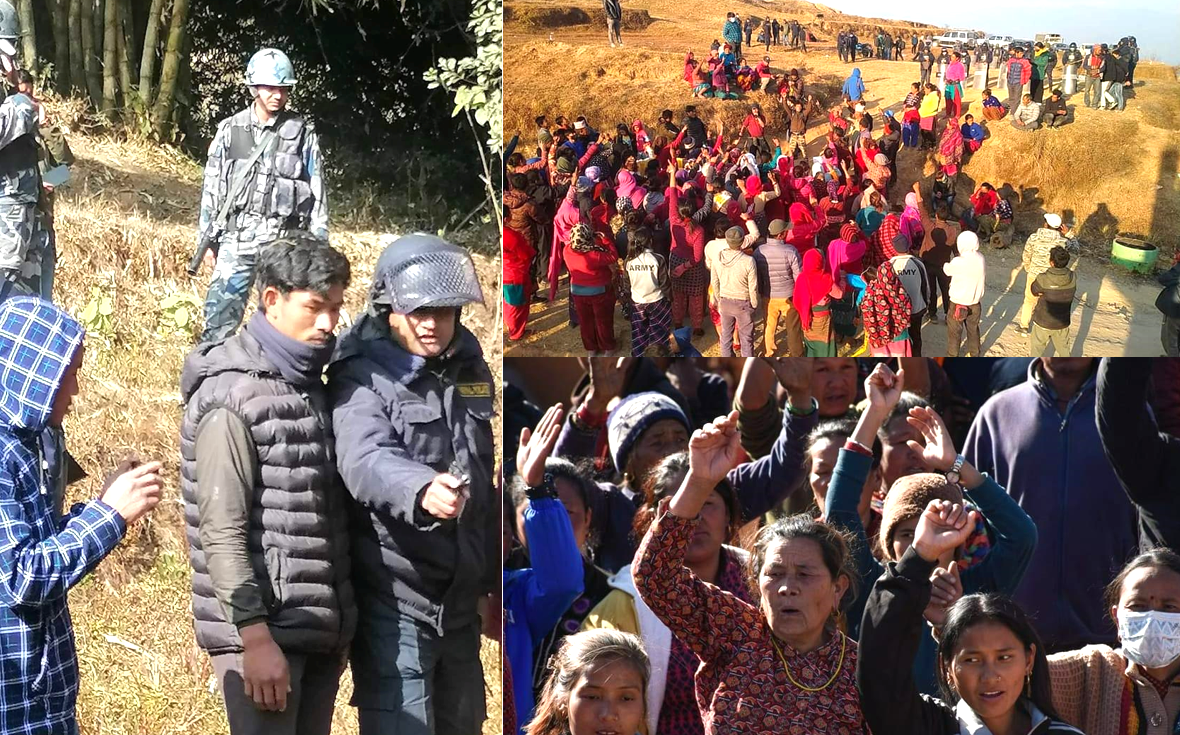 We, the undersigned organizations and individuals, strongly condemn the ongoing repression by Nepal’s police and armed police forces on the indigenous Tamang and other locals in Bojheni village, Shankharapur municipality Ward no. 3 in the northeast of Kathmandu for the construction of Tamakoshi-Kathmandu 200/400 kV Transmission Line and its substation.

Around 500 affected households of Indigenous Tamang and other affected locals of the area have opposed the construction of the substation and the transmission line in Bojheni since 2015. On1stJanuary 2023, when the Nepal Electricity Authorities (NEA) forcefully initiated a survey of the land to install a substation and transmission lines that are financed by the Asian Development Bank (ADB), the community protested. The protests have continued for more than a week. During the protest, at least seven protestors (including women and a minor) have been arrested. Further, the police threatened the protestors at gunpoint and manhandled the Ward Chair, women and other protestors causing injuries to at least a dozen people. The mobilization of armed police in the village has created an atmosphere of fear among the residents.

This substation is planned to be connected to a high voltage transmission line and substation in Ratmate, Nuwakot district, which will be funded under the US Millennium Challenge Corporation (MCC), and to another substation in Changu Narayan, Kathmandu. Thus, creating a web of transmission lines in the area, which has been a major concern of the affected communities.

The Indigenous and local communities in Bojheni village of Shankharapur municipality were not informed about the Project and no consultation was held with the communities. The authorities began implementing the project by acquiring communities’ lands through threats and intimidations. The Ward Chair of Shankarapur Municipality-3, Mr Surya Bahadur Tamang,also confirmed that even the local government is not aware of the ongoing survey process of the Project and no permission was taken from the local government in violation of legal provisions of Nepal.

Nepal is a State Party to the Indigenous and Tribal Peoples Convention (No. 169) of the International Labour Organization (ILO). The Project is a blatant violation of ILO 169, particularly Articles 13-19 and Article 14 (2) that guarantees the land rights of Indigenous Peoples. Article 14 (2) of the Convention explicitly states, “Governments shall take steps as necessary to identify the lands which the peoples concerned traditionally occupy, and to guarantee effective protection of their rights of ownership and possession.” Further, the Government did not secure the free, prior and informed consent (FPIC) enshrined in the UN Declaration on the Rights of Indigenous Peoples (UNDRIP)of the indigenous Tamangs, which Nepal voted in favour at the UN General Assembly.

Similarly, the Project is also in violation of the ADB’s Safeguards, which requires ascertaining the consent of affected Indigenous Peoples regarding physical relocation from traditional or customary lands, or development projects within customary lands under use that would impact the livelihoods or cultural, ceremonial, or spiritual uses that define their identity (for the projects that the ADB finances). However, the ongoing protests against the Project clearly indicate that the ADB has not followed its own Safeguards policy.

The Project-affected communities are concerned that the construction of the substation in the middle of their settlement area, with transmission lines running over their houses, lands and religious and cultural sites will significantly affect their livelihoods as well as cause negative effects on the environment, devalue their land, properties and even cause insecurity to their health and lives. Further, they fear that this may eventually result in displacing them from their ancestral lands and settlement.

For more than a week now, the Project-affected communities have been engaged in peaceful protests against the NEA and the Project implementing agency for forcibly conducting the survey works of the transmission line and the substation in Bojheni under the protection of the Nepal Police and Armed Police Force.

Over the years, the Struggle Committee and the Ward office have submitted their demands to concerned local and national authorities, including the NEA, the Ministry of Energy of the Government of Nepal as well as the ADB Nepal Resident Mission to urge them to relocate the Bojheni substation to an alternative location and reroute the Transmission Line. However, their demands have not been effectively addressed, which has led to the current tense situation.

We, the undersigned organizations, strongly call on the Government of Nepal, particularly the State-owned Nepal Electricity Authority and the Asian Development Bank (ADB) to: