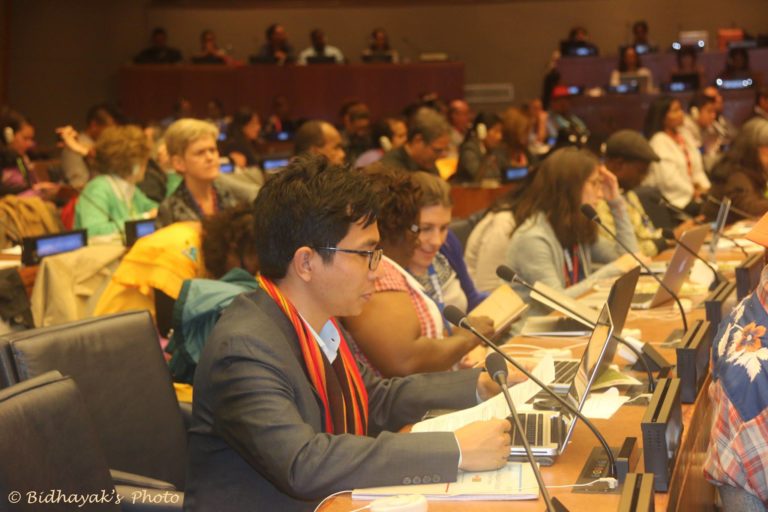 In a statement at the 16th Session of the United Nations Permanent Forum on Indigenous Issues (UNPFII) delivered on 27 April 2017, representative of Kapaeeng Foundation (KF) Bablu Chakma urged the UNPFII to encourage Bangladesh Government to expedite functions of CHT Land Commission and to form a separate Land Commission for plain land indigenous peoples.

Agenda Item- 4: Implementation of the six mandated areas of the Permanent Forum with reference to the United Nations Declaration on the Rights of Indigenous Peoples.

My name is Bablu Chakma and I am representing Kapaeeng Foundation. I wish to express my gratitude to Voluntary Fund for allowing me to participate in this session of the Forum.

Like indigenous peoples of all over the globe, one of the major problems for indigenous peoples in Bangladesh is land grabbing by influential people from the mainstream population. It has been acknowledged by the government of Bangladesh in its 7th Five Year Plan (2016-2020). This development plan also acknowledged that the government policies to protect the land of ethnic people have not been adequate.

Hence, most of human rights violations upon indigenous peoples in Bangladesh take place centering around land. Land grabbing continues to be a major issue of concern for indigenous peoples. In 2016, over 15,430 acres of lands belonging to indigenous peoples were under process of acquisition, mostly for the establishment of special economic zones, tourist spots and reserve forests. In the same year, land grabbing in the plains resulted in the eviction of 1,216 families from their homesteads and left 1,035 families under threat of eviction both in the CHT and in the plains. The government is yet to form a separate Land Commission for plains indigenous peoples despite its assurance in its election manifesto.

One of the core issues of the CHT Accord of 1997 signed between Jumma peoples and Government of Bangladesh is resolution of land disputes through a Land Commission headed by retired Justice in accordance with the laws, customs and practices in force in the CHT. The Land Commission could not start its functions for resolution of land disputes for last 17 years due to pending amendment of contradictory provisions in the CHT Land Dispute Resolution Commission Act 2001.

Recently, the government has taken a bold initiative through amendment of the CHT Land Dispute Resolution Commission Act in 2016. However, the Land Commission is facing enormous challenges in terms of its budget, office space, human resources and necessary expertise to settle land disputes. The Rules of Business of the Commission has not been final as of today. It would be difficult for the Commission to start processing cases relating to land disputes as well as adjudicating them without the Rules of Business.

It is worthy to mention that the rehabilitation of Bengali settlers outside the CHT is a must for sustainable resolution of the land disputes in CHT. In this regards, a strategic plan should be taken to relocate the Bengali settlers who were settled down in CHT in 1979 and onwards by the then governments.

Given this backdrop, I would like urge the Forum to encourage Bangladesh Government:
1) For proper resolution of land disputes to ensure-

2) To form a separate Land Commission for restitution of dispossessed lands of indigenous peoples in the plains.