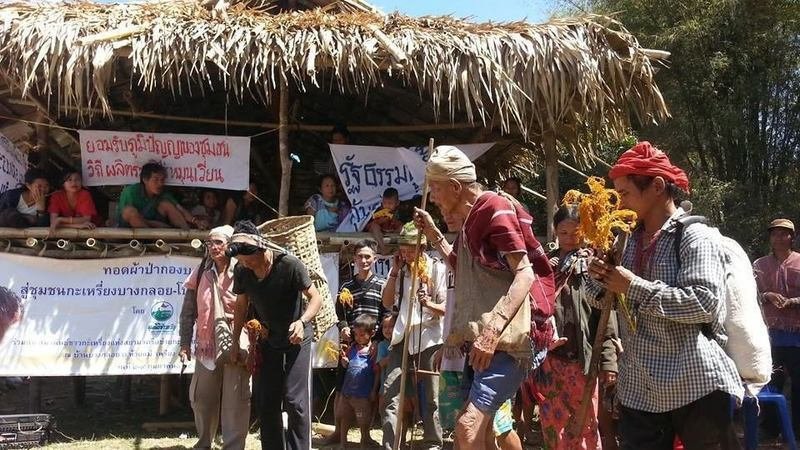 The media reported during the 25-31 October 2018 that the authorities in the Department of National Park. Wildlife and plants I met the inquiry officer. Kaeng Krachan Police Station Kaeng Krachan District Phetchaburi Province To prosecute, investigate and prosecute the traditional Karen ethnic group who used to live in Bang Kloi on the land and the land. Which was later declared Kaeng Krachan National Park.

The Karen who are targeted to be prosecuted are 6 Karen or their descendants. One of them was the successor of Mr. Koimami or his grandfather Kai, the spiritual leader of the Karen people, on the 107-year-old land of the dead who died on October 5, 2018. They may have been prosecuted. For the possession or possession of land in the National Park. Is there a way to do this? It was overrun by Kaeng Krachan National Park in 1981.

The 6 Karen people are fighting to protect their own rights and ethnic Karen community of some Kook-on land. They called on the state to take responsibility for the unlawful removal. And the human rights abuses of the so-called. “Tanaosri Battle” in 2011, which officials used to force them to evacuate the land and community home on Bang – Native They have lived and lived for generations. They burned their barn houses, their farms, and dozens of other Karen ethnic groups. There are nearly 100 houses destroyed.

After the verdict of the Supreme Administrative Court. The relevant government agencies will be responsible for the rehabilitation and protection of the Karen people affected by the operation. This includes the Karen people living in harmony with the rights of the community and human rights. But it turns out that there are officials in the Department of National Park. To file a complaint with the Kaeng Krachan investigation officers to prosecute the 6 prosecutors or their descendants. The incident occurred before the authorities forced the relocation of his grandfather Kai and Karen from the area of ​​Bang Kloi on the land and burned their homes. He in 2011

The Supreme Administrative Court ruled that the Karen people on Bang Kloi – the land of the mind. Is a traditional local community This means that the Karen group has been there for a long time and is not an intruder. The law is intrusive. And when their community is recognized as a traditional community. They are protected by the Constitution of Thailand since 1997 and are protected by resolution. Karen on August 3, 2010 on the revitalization of Karen lifestyle, so living in the home area of ​​Bang Kook on – the heart of the grandfather and Karen, such groups are not considered intended to invade the national park. Kaeng Krachan is considered guilty.

The Karen people are also living on the basis of production. And research has proven that this way of life contributes to the ecosystem. Because the farm is rotated. There is a rotation to restore the land to adjust the natural balance. It does not destroy natural resources as understood ( read more ).

Year 2557 The story of Karen Bang Kloi on – the heart of the land. Get more attention. When you’re in love with Billy, or Billy, who is the granddaughter of her grandfather. He is also a prominent figure in the struggle to protect the rights of ethnic Karen people. Disappearing on April 17, 2557 after being detained by Kaeng Krachan National Park ( Read more )

The efforts of some officials under the Department of National Parks. Attempting to inform the grandfather of the prosecution. And the Karen who filed the case to the Administrative Court of the other five above, in addition to showing the disapproval of the judgment of the Supreme Administrative Court. It may also be a harassment or revenge on the Karen ethnic group. This has resulted in the threat of the destruction of dozens of Karen villagers in the same house. The right to be fair and the same as the six prosecutors.

Even now (November 8, 2018) the lawsuit has not progressed. But we still can not and still worry. If there is a case against the Karen people to continue. Even after the final result, the court may decide that they are not guilty. But on the way of fighting the case. This will create difficulties for the people of this course. For this reason, we want to invite everyone who agrees with us. Sign up to speak to the people involved. Through our request, as follows.