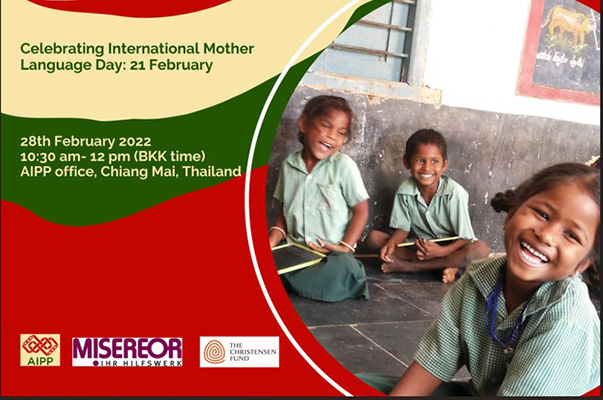 AIPP theme: “Our roots, our languages!

Mother tongue-based education for our future!”

We begin the statement with the quotes from Assembly of First Nation (AFN) national chief Perry Bellegarde, “The International Decade of Indigenous Languages demonstrates a strong international commitment to restore, support, and strengthen Indigenous languages. Our languages are our identity, our wisdom, our worldview. They must not be lost”.

The International Mother Language Day is celebrated worldwide on 21 February every year after it was first announced by UNESCO on 17 November 1999 and formally recognized by United Nations General Assembly with the adoption of UN resolution in 2002. This is to specially commemorate the importance of the mother language and its promotion, preservation and protection.  This year, the 23rd edition of International Mother Language Day, is being observed with the theme “Using technology for multilingual learning: Challenges and opportunities”. The objective is to contribute to the achievement of Sustainable Development Goal 4 by recognizing the role of teachers in promoting multilingual teaching and learning through technology and considering the potential role of technology, including traditional media such as radio and television, in supporting multilingual teaching and learning; and to discuss action needed to ensure the design and delivery of technology-enabled multilingual teaching and learning.

Language is the wheel of society, it is our identity and culture. It is through language the world communicates with each other. We preserve tradition, customs, history and memory in language. Through this, we build our future. All the languages in the world have equal importance, but the mother language holds a special place in heart of every individual. Because it is believed and established fact that education, based on the first language or mother tongue, must begin from the early years as early childhood care and education is the foundation of learning.

It is a matter of great concern that we are losing language at an alarming rate of one language per two weeks. It is estimated by linguists that by the end of the century it will fall to thousands or hundreds if not checked. The Indigenous Peoples’ language who are a minority by number is more vulnerable to language loss. This is because the Indigenous Peoples follow the oral tradition, lack a formal writing system, often overwhelmed by mainstream language.

In most countries, education is imparted in the national language, and indigenous language is sidelined. This puts indigenous children at a disadvantage and stalls their natural learning ability. This problem is compounded when education is digitalized. Access to technology is a huge challenge for Indigenous Peoples. We have witnessed the grim scenario during the COVID-19 pandemic, while education was imparted through digital means, the indigenous children and youths barely could continue their learning.

The Indigenous Peoples are the wide range of knowledge holders and speakers of most of the languages in the world.  The smooth knowledge transfer can be possible only through hands-on learning by indigenous youth but not in a modern classroom setting. Therefore, there is an urgent need to enhance the intergenerational transmission of indigenous knowledge, as a complement to mainstream education. More efforts should be made to bring indigenous language and knowledge into school curricula and to move to learn back into the community, thus reaffirming the status of elders as knowledge holders. This reflects the theme of AIPP “Our roots, our languages! Mother-based tongue education for our future!”

The declaration is a ray of hope for the Indigenous Peoples across the globe in terms of preserving and promoting the vital aspects of their culture and identity. This can generate new ideas and help build a long-term strategy to counter language loss.

This effort also contributes to the 2019 Cali commitment to equity and inclusion in education and the United Nations International Decade of Indigenous Language (2022-2032), which places multilingualism at the heart of Indigenous Peoples’ development.

AIPP celebrates this auspicious occasion of International Mother Language Day emphasizing the need for special attention to Indigenous Languages and calling on the government, UN agencies and other stakeholders to commit and create enabling conditions, support the effort and foster multiculturalism with inclusive vision contextualizing with COVID-19 recovery.