Philippines: Indigenous Peoples will die of hunger not with COVID-19, govt urged for urgent action to deliver socio-economic relief 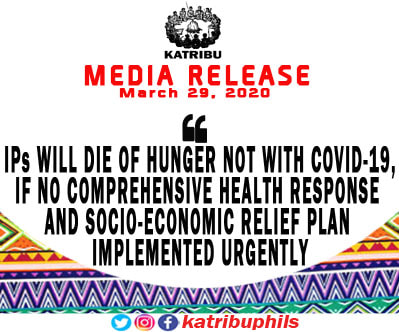 Weeks after the Luzon-wide Enhanced Community Quarantine (ECQ) was declared on March 16, lockdown had reached to indigenous peoples communities. Three (3) Aeta communities in Floridablanca, Pampanga is placed under ECQ after 2 confirmed cases of COVID-19 were documented. Close to 1000 families in Aeta villages of Nabuclod, Mawacat, and Camachile are seriously affected by the lockdown.

Anxiety looms over our Aeta brethren as they face the risk of being exposed to COVID-19. At the same time, their movement is restricted due to lockdown as going to hill farms became more difficult. The government, especially the LGU must ensure that the village people will get enough food, water and sanitation supplies to cope with the community quarantine, explained by Reynaldo Paulin, National Coordinator of Kalipunan ng mga Katutubong Mamamayan ng Pilipinas (Katribu).

Central Luzon Aeta Association, a regional member organization of Katribu, reported that affected families in Nabuclod are around 700; Mawacat has 200 plus families; Camachile has around 200 families.

Meanwhile, in the Sierra Madre region, similar restrictions on peoples mobility had been reported. In the Remontado Village of Sitio Nayon, Barangay Sta. Ines, Tanay in Rizal province, indigenous peoples are barred by the state security forces from going to forest areas to gather ubag (wild root crop). Food relief did not reach yet to the seaside community of Dumagat in Barangay Magsikap, General Nakar, Quezon. Most villagers rely on catching fish and sihi (seashell) for food. In Barangay Lubayat, Real, Quezon, indigenous communities face a similar plight. Their livelihoods are heavily affected and the people are running out of food.

More than ever, health and socio-economic response are direly needed by indigenous peoples in this pandemic crisis. We urge the national government and LGUs to extend help to the indigenous communities found in the interior, remote, hillside, and forest areas that are also affected by the Enhanced Community Quarantine, Paulin averred.

He added, We are displeased after knowing that indigenous peoples are left out as the government deals with this pandemic crisis. In this respect, we support the public clamor for free mass testing as lockdowns will remain irrelevant if no tests have been done.

IPs will die of hunger and not with COVID-19 if no comprehensive health response and socioeconomic relief plan implemented urgently. We dont want to be included in the statistics of COVID-19 confirmed cases and deaths while Duterte seeks emergency powers rather than emergency and health response, Paulin said.

With limited mobility and resources, indigenous communities are at high risk and seriously affected by the enhanced community quarantine. Katribu and IP advocates launched a call for donations for Lingkod Katribu a donation drive to deliver immediate food relief and hygiene packs to communities of Dumagat in Sitio Nayon, Barangay Sta. Ines, Tanay, Rizal and Barangay Magsikap, General Nakar, Quezon; Tumanduk communities in Barangay Lahug, Tapaz, Panay Island; and Aetas in villages of Nabuclod, Mawacat and Camachile in Floridablanca, Pampanga.