Philippines: Assert our Right to Self-Determination 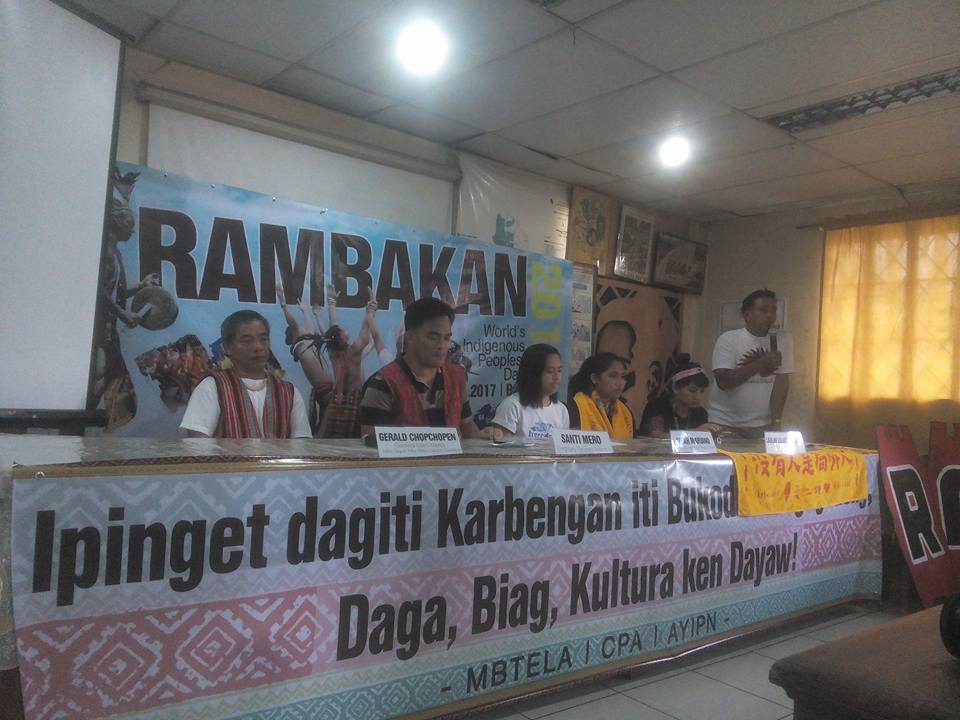 We stand in solidarity with all indigenous peoples of the world in celebrating  World Indigenous Peoples’ Day on August 9, in assertion of our right to self-determination, identity and culture.

We mark this day amidst intensified neoliberal attacks on indigenous peoples rights all over the world. The intensifying plunder and exploitation of our ancestral lands in the form of destructive projects and militarisation is an outright assault to our right to self-determination. Poverty, hunger and lack of social services remain, especially in interior communities where most indigenous peoples’ territories are  situated.

In the Cordillera, we deplore the government’s callous connivance with big mining interests amidst Pres. Duterte’s lip-service to protect the environment in his last state of the nation address. The mining operations of Lepanto Consolidated Mining Corporation and Benguet Corporation continue to devastate our lands despite previously served suspension orders from former  Department of Environment and Natural Resources Secretary Gina Lopez. The watershed cradle of the north remains under threat of massive environmental devastation with the application for new mining explorations covering 66% of the region’s total land area. This includes Cordillera Exploration Company Inc. (CEXCI), a subsidiary of Nickel-Asia Inc. owned by Congressman Ronnie Zamora’s brother, Manuel Zamora.

Energy projects which compliment the needs of mining corporations also threaten to destroy the Cordilleras. Big business interests  such as the Aboitiz, Gokongwei, Sy, Pangilinan and Ayalas endanger the rich land and waterways of the tribal communities in the region. To date, there are 81 approved hydroelectric power plants with 16 pending approval.

Big mining and energy corporations continue to violate indigenous peoples rights through the circumvention of existing laws, government incompetence and corruption. Even the mechanism of Free, Prior and Informed Consent (FPIC) is being used to manipulate the entry of mining, energy and other destructive projects into ancestral territories. With or without the FPIC provision in the Indigenous Peoples Rights Act,  indigenous communities have an inherent right to oppose and never allow the entry of these projects that will cause severe devastation over our lands.

The plunder  and exploitation of ancestral lands is accompanied by intense military operations, and this has been the case in the Cordillera ever since.Military combat operations heightened nationwide since Duterte’s declaration of all-out war against the revolutionary forces. The Cordillera region was among the targets of the AFP upon Duterte’s directive to “flatten the hills”. The conduct of war of State security forces consistently violated human rights and international humanitarian law in all of the Philippine government’s national internal security policies and programs. In Namal, Ifugao, communities were subjected to forced evacuation because of continued military operations. In Malibcong, Abra, indiscriminate airstrikes using phosphorous bombs, continued ground operations and harassment of civilians perpetrated by the 24th IBPA under the 7th Infantry Division sowed fear among peasants and their children. In Kalinga province, divestment and destruction of properties, and the physical assault of civilians and barangay officials were committed by the 50th IBPA under the 503rd Brigade. In the region alone, 14 cases of illegal arrest and detention based on trumped-up charges were documented, and there is intensified harassment, surveillance and vilification of people’s organizations and community leaders. Ten political prisoners are currently detained in Mountain Province, Ifugao, Kalinga and Baguio City.

We recognize the similarities of our plight with that of fellow indigenous peoples in the country. Our Lumad brothers and sisters have been consistently bombarded by human rights abuses by the military and paramilitary forces in Mindanao. At least 300,000 are internally displaced due to the military operations in Mindanao, intensified with the declaration of martial law therein.   Lumad schools who offer free education and teaches literacy, numeracy and agriculture classes were forced to close. Indigenous peasant leaders are being killed in Mindanao, as well as in the Visayas and Southern Luzon. These areas are under threat of unbridled plunder with the entry of similar mining and energy projects. These areas of indigenous peoples are also consistently and defiantly united in opposing these projects.

Our common plight as indigenous peoples experiencing national oppression, discrimination, development aggression and human rights violations strengthens our resolve to unite with indigenous peoples and other oppressed sectors in the Philippines, as well as our brothers and sisters in other nations.

We commit our full and wholehearted participation in the upcoming “Lakbayan ng Pambansang Minorya 2017” (Caravan of National Minorities) which will be held nationwide and shall converge in Metro Manila on September 1 until September 21. We will link arms with all indigenous peoples and the Moro people to unite our voices in asserting our right to self-determination.

We therefore mark August 9 as a day of struggle, while celebrating gains in indigenous peoples worldwide in the assertion of our right to self-determination.

As Cordillera hero and martyr Markus Bangit said, “Until our right to self-determination in recognised, the struggle will not end. If it means the sacrifice of our lives to achieve freedom, then so be it!”