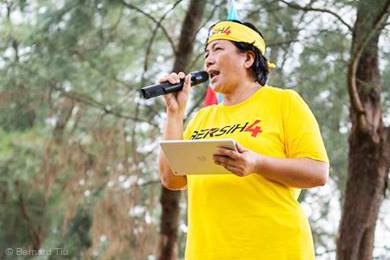 Kota Kinabalu – Jannie Lasimbang, a prominent human rights and indigenous rights leader, is set to go to trial 3-4 May 2016 at the Kota Kinabalu Magistrate Court. The prosecution of Lasimbang has drawn criticism and over 100 civil society organization from around the world which signed a petition condemning the ongoing judicial harassment and intimidation against Lasimbang.

The petition was submitted to the Prime Minister’s office and Attorney General on 24 January 2016 and a follow up was made on 30 April 2016. Both submissions were not acknowledged.

She is facing multiple charges under Peaceful Assembly Act 2012 for her alleged role as then vice-chairperson of the Coalition for Free and Fair Elections (Bersih 2.0) in the fourth series of peaceful assemblies of the Coalition (Bersih 4.0). The assemblies were held on 29 and 30 August 2015 in major cities in Malaysia including Kuala Lumpur, Kota Kinabalu and Kuching, as well as over 70 cities around the world.

“We are disappointed that the Malaysian authorities are going ahead with the trial despite the global condemnation of this unjust state action of legal harassment and intimidation . We reiterate our call to drop all charges against Lasimbang and instead, start engaging constructively with the human rights activists for advancement of human rights and fundamental freedoms in Malaysia.” said Joan Carling, Secretary General of the Asia Indigenous Peoples Pact (AIPP). AIPP is one of the signatories of the petition.

The overnight rally in Kota Kinabalu had more than 3,000 people in attendance but ended two hours shy of its 24-hour target after a police barricade stopped some 1000 participants of the assembly from walking towards the city.

The Kota Kinabalu Magistrate Court charged her under the Peaceful Assembly Act for having allegedly organised the Bersih 4.0 assembly at Likas Bay Park without giving a 10-day notice to the city police chief prior to the event. She is charged for two counts of the same charge, one for of each day of the 2-day event. Later in November, Maria Chin Abdullah, Chairperson of Bersih 2.0 was also charged under the Act.

Although Bersih Sabah had submitted the form required for the 10-day notice, the failure to append a consent letter from the owner of the Likas Bay Park (City Hall) was construed as not giving the 10-day notice.

The Kota Kinabalu Magistrate allowed Lasimbang bail of RM3,000 (approx. USD 697) with a deposit of RM1,000 (USD 232) for each charge. The court hearing was initially scheduled for 23 and 24 November 2015 and was later rescheduled several time. She has pleaded not guilty.