Let our rivers flow! TFIP statement on the occasion of international day of action for rivers 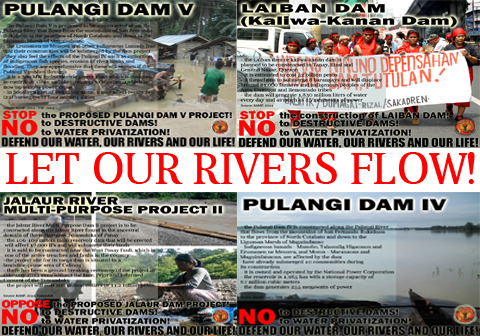 March 14 is International Day of Action against Dams, for Rivers, Water, and Life. It was declared as such by an international gathering of peoples affected by dams in Curitiba, Brazil in 1997. Since then, various actions against large dams have been held on this date annually by affected peoples and their advocates around the world to make known their struggles not only in their respective countries but also at the international level. On this day, the Philippine Task Force for Indigenous Peoples’ Rights (TFIP) re-echoes the voices of indigenous peoples in the Philippines and the world to stop building large dams in their territories and let their rivers flow free to nurture lives.

Large dams built all over the world have become monuments to the mis-development of human societies. Experiences of dam-affected peoples show that large dams have only benefitted a few and have had more human and environmental costs than expected benefits. Dams physically alter rivers and deplete their water, which serves as the bloodline of numerous communities, especially indigenous peoples. Numerous cases around the world show how indigenous peoples who were forced to move from their ancestral homes by dam construction have disintegrated from once cohesive and self-sufficient communities to scattered peoples suffering from hunger, unemployment and rampant social problems. Displaced villagers hardly ever get any benefit from the electricity generated by the dams.

Scientific studies have also found large dams to be uneconomic. A report prepared by researchers from Oxford University based on the most comprehensive economic analysis of large dams ever “undertaken states: “We find that even before accounting for negative impacts on human society and environment, the actual construction costs of large dams are too high to yield a positive return. … Large dams also take inordinately long periods of time to get built, making them ineffective in resolving urgent energy crises.” Simply put, dams don’t just destroy the environment and impoverish local communities. They also don’t make economic sense. (International Rivers 2014)

Indigenous peoples in the Philippines have had their share of adverse effects and sufferings brought about by the construction of large dams. Many people were physically and culturally displaced when the

Ambuklao, Binga, San Roque, Magat, Pantabangan, Casecnan, Pulangi IV and other dams were built. There were serious losses in biodiversity and food sources originally found in rivers, all the way from the reservoir sites to downstream of these dams. The water contained in some of these dams are not even fit for human and animal consumption as they are located near mining projects and commercial agriculture with highly toxic chemical inputs. Some rivers have also been used by large mining corporations to build mine tailings dams, as in the case of Philex and Lepanto mines in Benguet. Eventually, the rivers where these dams are located are degraded by severe siltation or sedimentation, contributing to flooding and erosion of river banks downstream.

After the Ambuklao and Binga Dams were built in the 1950s, the Philippine government promoted and supported the construction of more large dams in the country. However, most of these dam projects were met with staunch opposition, especially from indigenous peoples’ organizations and communities. One successful struggle was the one against the giant World Bank-funded Chico River Dam Project, which did not push through because of the united, decisive and strong collective action by the Kalinga and Bontoc people. Other dams were constructed, but were also met with strong opposition from indigenous peoples and advocates of indigenous peoples’ rights. Militarization, which aimed to repress these struggles, led to other human rights violations including killings against indigenous peoples and their advocates. Two indigenous dam activists, Macliing Dulag and Nicanor delos Santos, were killed because they led their peoples, the Kalinga and Dumagat, respectively, in their struggles against large dams.

At present, the government is strongly pushing for the construction of more large dams including the Pulangi Mega Dam V in North Cotabato and Bukidnon, the Kaliwa or Laiban Dam in Rizal and Quezon, the Jalaur dam in Panay and the Balog-balog Dam in Tarlac. All of these have yet to be constructed completely. Already, there is widespread opposition by indigenous peoples’ organizations and communities, and their advocates because of the serious threats these dam projects pose to their continued survival. Another concern is that these dams will be constructed even without the free, prior and informed consent (FPIC) of indigenous communities. All large dams built before did not pass through legitimate FPIC processes with affected indigenous communities located upstream and downstream of the dams.

The Philippine Task Force for Indigenous Peoples’ Rights, in unity with its partner organizations and indigenous communities, urgently calls for a stop to large and destructive dam projects. Genuine FPIC processes based on customary decision-making practices, including the people’s right to say NO to unwanted dam projects must be respected and recognized. Instead, genuine development alternatives, such as community-based renewable energy systems that truly benefit the people should be promoted.

Stop the construction of large and destructive dams in indigenous peoples’ territories!

Uphold indigenous peoples’ rights to their ancestral domain and resources including rivers!

Stop the privatization of water resources in the country!

Let our rivers flow free so that they may continue to sustain our lives up to the future generations.