Deforestation An Attack on The Human Rights Of Forest Peoples

The European Commission must recognise deforestation is not only about the environment but human rights, especially for indigenous peoples.

The destruction of the world’s forests for industrial agriculture—whether clearing land in south America to feed international soy, beef and leather markets, destroying Indonesia’s forests for palm oil or razing forests in west Africa to plant cocoa—is rightly gaining attention around the world. Europe is the second biggest importer of agricultural goods linked to deforestation and the European Commission is preparing a regulation that would prevent such products gaining entry to the European market. Yet the commission’s solution addresses only half the problem.

The proposed regulation fails to recognise that forests are not just an ecosystem: they are also home to millions of forest peoples. For indigenous peoples, the destruction of forests is explicitly linked to human-rights violations. These include dispossession of our customary lands and resources, threats and violence, as well as loss of access to food, clean water and our traditional medicines, destruction of our culture and spirituality and devaluation of our right to self-determination—and the cultural, spiritual and material impoverishment these violations entail.

We are not only however the most affected by deforestation—we are also the best at stopping it. Our knowledge, culture, spirituality and history of taking care of our lands and forests is recognised by policy-makers and scientists around the world as one of the most effective ways of keeping forests standing and maintaining biodiversity in good health. Our local, independent information is also essential for understanding what is really happening in remote areas of the forest frontier. As a result, the best—as well as cost-effective—way to protect forests is to respect and protect indigenous peoples’ customary tenure rights, grounded in indigenous knowledge.

Yet despite this evidence, the commission’s regulatory proposal on deforestation would not require that access for products to the single market be conditional on respect for our internationally recognised human rights. Such products would have to comply with country-of-origin laws but that’s not enough: in most forest countries, our human rights are not actually protected by national laws and they are even less respected in practice.

Failure to include human rights in the draft regulation creates unnecessary risks for us and for our forests. It would incentivise companies to appropriate areas under existing cultivation by communities to avoid new deforestation—causing harms to people and indirect leakage of deforestation to new areas. It would fail to tackle land allocation and tenure, underlying issues that drive deforestation across the tropical forest belt, increasing the chance that supply chains would simply shift between countries to accommodate EU requirements without any change on the ground. And it would be inconsistent with the EU’s commitments to respect and promote human rights, including the rights of indigenous peoples.

It is not too late for the commission to shift course. On October 20th the chair of the European Parliament’s environment committee and its rapporteur on deforestation wrote to key commissioners, urging them to ‘make this law for nature and for people … by making free, prior and informed consent to use and convert land a pre-condition for forest- and ecosystem-risk commodities to enter the EU market’.

What is needed now—and urgently—is a truly integrated environmental and human rights approach that protects, respects and secures our collective land and territorial rights as indigenous peoples, which could signal a new era around the world. The EU must also ensure its actions in other areas, such as trade, are coherent with this approach: for example, it should not ratify the Mercosur agreement unless and until adequate protections for human rights and the environment are included.

Last month, more than 160 civil-society organisations and academics from around the world sent an open letter to global leaders, calling on them to integrate human rights in environment and climate policy. The EU must heed this call, and recognise and protect what indigenous peoples have long known: people and the environment are not separate but all part of the same Mother Earth. And there is no better way to protect the forest than to protect the rights of the traditional owners and guardians of it.

Hipólito Acevei is president of the Federation for the Self Determination of Indigenous Peoples, made up of 12 organisations of indigenous peoples of Paraguay. 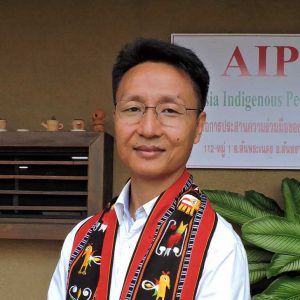