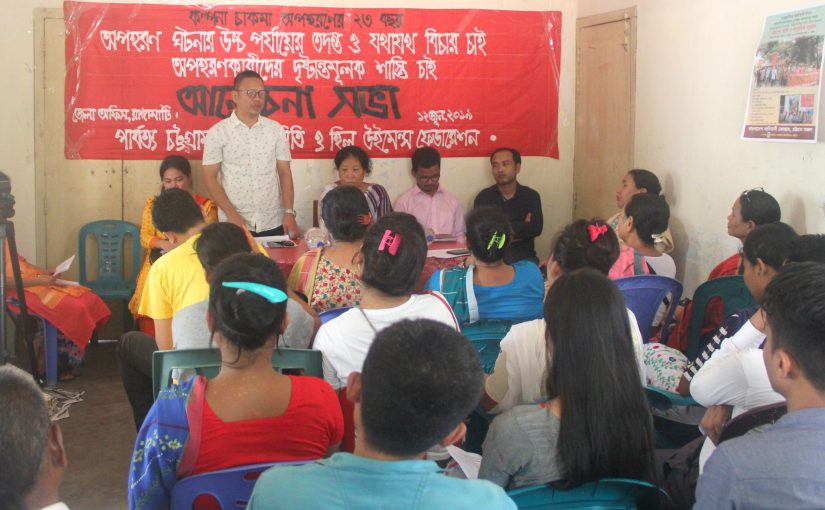 In his speech as chief guest, Sharat Jyoti Chakma said that the state of Bangladesh failed to trace out Kalpana Chakma for 23 years due to prevailing culture of justicelessness and discrimination policy toeards Jumma peoples in the Chittagong Hill Tracts (CHT).

In a statement, PCMSS and HWF said that the kidnapping incident of Kalpana Chakma passes 23rdyear. The state of Bangladesh has miserably failed to trace out the whereabouts of Kalpana Chakma even after 23 years; nor has she been able to bring forth proper justice to the heinous crime of anti-humanity; let alone awarding of exemplary punishment to the perpetrators!

This is the bright illustration of justicelessness to the Jumma people of CHT on part of the state in this land. This is the best instance of negligence and deprivation of the state towards the women society at large. It is an irony to the much-claimed-about ‘zero-tolerance policy’ of the present government against violence upon women and children. It is a partial portrait of discrimination and indifference of the state authority towards the vulnerable and marginalized population living in the country. This is the burning instance of brazen impunity to the alleged perpetrators offered by the state authority. This provides a direct witness finger-pointing that the Jumma-inhabited CHT is under extreme squeezing roller of the army. This proves that the savagery like horrendous violence against Jumma women including abduction, rape and killing after rape is being used as the heinous weapon in forcible occupation of lands, ethnic cleansing of the Jumma people, and above all, turning the Jumma predominated CHT into a Muslim-dominating region.

It is to be mentioned that Kalpana Chakma, the then Central Organizing Secretary of Hill Women’s Federation (HWF), was forcibly kidnapped from her house of New Lallyaghona village under Baghaichari Upazila of Rangamati Hill District at the gun-point at the wee hours on 12 June 1996, by a troop of military and law-enforcement force and Village Defence Party (VDP) personnel led by Lieutenant Ferdous, then commander of Kojoichari army camp nearby. During road-blockade program in protest of Kalpana Chakma kidnapping jointly organized by HWF and Pahari Chatra Parishad (Hill Students’ Council) on 27 June 1996, Rupom Chakma was shot to death while Sukesh Chakma, Manotosh Chakma and Samar Bijoy Chakma were brutally killed with sharp weapons in an organized communal attack of local VDPs and Muslim settlers in Babupara and Muslim Block areas of Baghaichari upazila with the direct support of Baghaichari army camp authority. In the face of wide-scale condemnation and protest at home and in abroad, the government though formed a 3-member Investigation Committee headed by Retired Justice Abdul Jalil, yet the government has not made the report public even after 23 years.

An allegation filed with the local Baghaichari Police Station by Kalindi Kumar Chakma, the elder brother of Kalpana Chakma immediately after the kidnapping incident following which though the Final Investigation Report of Police was submitted on 21 May 2010 after 14 years, the report mysteriously avoided names of the real alleged persons and offenders. Consequently, the complainant Kalindi Kumar Chakma submitted a Disagreement Appeal to the court against the said Final Report. Afterwards, in context of the Disagreement Appeal of the complainant, the court, after hearing on 2 September 2010, ordered the CID police for further investigation of the case. Following the court order, the CID Investigation Officer of Chittagong Zone and Rangamati District Superintendent of Police submitted their Investigation Progress Report to the Chief Judicial Magistrate one after another. The reports were though titled of ‘Investigation Progress Report’ but no progress was to be seen in their reports as such.

After more than 20 years 5 months following kidnap of Kalpana Chakma and filing the case, the 39thInvestigation Officer Abul Kalam Azad, Superintendent of Police of Rangamati district, submitted his Investigation Report to the Cognizance Court of Rangamati Hill District on 7 September 2016. But it is regretting fact that the report contained repeated words of his predecessors through which an ill-effort was employed to cover the real culprits and it was claimed: ‘…In the final investigation, no specific evidence was found that could establish the ground indicating involvement of Lt. Ferdous, VDP Nurul Haque and PC Saleh in the incident.’ Even more, though it was admitted in the report saying that ‘the primary investigation found the truth that Kalpana Chakma was kidnapped’ yet irresponsible and disheartening statement was made in the report saying: ‘…despite relentless efforts of 39 Investigation Officers, Kalpana Chakma could not be rescued as of today and the probability of rescuing her is very less.’ Alongside, covertly, it was recommended to drop the case or to stop the investigation process saying: ‘…investigation of the case will be revived on availability of further information about Kalpana Chakma or her rescue becomes possible in future.’

It is noteworthy to be mentioned here that meanwhile, Kalindi Kumar Chakma, complainant of Kalpana Chakma abduction case, submitted his Disagreement Appeal to the court rejecting the ‘Final Investigation Report with recommendation for stopping the investigation process’ submitted by the 39th Investigation Officer and demanded to ensure proper justice after having undergone through a high-level probe. Accordingly, the court fixed 8 June 2017, the 1st Hearing Day over the appeal and ordered the police to submit police report on Disagreement Appeal. Since then and onward, the police repeatedly began to seek time mentioning inability in submitting the report on their part. It has been learnt that the court has fixed the next Hearing Day on 3 July 2019.

It is of worth mentioning that the incident of Kalpana Chakma kidnapping became a national and international issue. It is a burning symbol of oppression, suppression and violence against indigenous women of CHT and the country as well. It is a fact that the kidnapping incident of Kalpana Chakma even though passes 23 years, the state, government, various responsible intelligence agencies, army, judiciary and the concerned administration – all of them, have spelled an extremely miserable failure in unearthing whereabouts of the victim and ensuring proper justice over the case by bringing the alleged offenders under trial and awarding exemplary punishment to the culprits involved. On the other end, the government or the administration has undertaken no measure over the brutal killings of Sukesh Chakma, Manotosh Chakma and Samar Bijoy Chakma who were killed during the half-day road blocked program staged in protest of Kalpana Chakma abduction.

Furthermore, it is not only the kidnapping incident of Kalpana Chakma, even after signing the CHT Accord in 1997 aiming at resolving the CHT crisis through political and peaceful means and establishing just rights of the CHT permanent residents including the Jumma people, it is due to the reason of not having the Accord properly and fully implemented and especially, many indigenous women have fallen prey to sexual abuse and hatred violence by the Muslim Bengali settlers and personnel of security forces.

Chronological record reveals that it is only in 2018, 53 numbers of indigenous women and girls have fallen prey to sexual violence. Of them 18 women and girls were raped, 12 were killed after rape and 11 were attempted to rape. The incident of two Marma adolescent sisters who were fallen prey to sexual violence perpetrated by the army personnel of Orachari Army Camp under Bilaichari Upazila of Rangamati Hill District on 22 February 2018, has been slipped under the carpet while keeping the victims under police custody till today abusing might of the state power. Similarly, the incident wherein involved three BGB personnel in raping two Tripura adolescents at gun-point in Ramgoti village under Lama Upazila of Bandarban Hill district on 22 August 2018, has been kept under carpet by way of keeping the victims house-arrest in their village. It is through these incidents, the real picture of extreme disgrace and insecurity being created by the state machinery, itself, with the Jumma women and girls, have vividly got exposed. In fact, the on-going process of investigation and trial of Kalpana Chakma kidnapping incident has nakedly embodied the evil culture of unjustness and injustice in this country and unveiled the extreme suppression and oppression being meted out upon the national ethnic minority communities in the country.

It is also to be mentionable that the government has now totally stopped the implementing process of the CHT Accord. On the contrary, the government has been implementing the anti-accord programs and anti-interest of the Jumma people programs the objective of which is to turn the Jumma predominated CHT into a Muslim-dominated region – the Pakistan-hatched blue print. The government, with a view to implementing the most heinous and racial-religious plan, has resorted to sponsorship and indulgence ranging from usage of law & order forces, army, intelligence forces, local administration, ruling party organs, Bengali settlers’ organizations, ultra-communal and fundamental forces to the Reformist armed group and foreign insurgents named Arakan Liberation Party active in CHT allowing them to perpetrate killings, kidnapping and extortion unabatedly. On the other side, as it had been done before signing of the Accord earlier, the government is engaged in suppression and oppression campaign against the individuals and organizations struggling for implementation of CHT Accord and basic rights of the indigenous peoples including land rights termed as ‘terrorists, armed miscreants and separatists’ while subjecting them in projected cases, arbitrary arrest, searching houses, detention, physical torture in the camps and sending to the jail, etc. Consequently, the Jumma people in CHT have been made pass a life in suffocation and insecurity.

It needs not to be mentioned that for all this violence incidents, be it the state, government, judiciary, administration, law & order and security forces – none of them can skip the responsibility. Justice to the barbaric and abhorrent incident like Kalpana Chakma kidnapping cannot be a miscarriage by resorting to introduction of irresponsible statement and indifference role on part of the government. The culprits responsible for the crime must be identified and awarded exemplary punishment through trial and it is the government or the authority concerned to ensure the justice. Indeed, it is due to not having the CHT Accord properly and fully implemented; not having the administration of CHT put into effect in light of the CHT Accord and not having the culture of proper justice established amongst the government, administration and judiciary; even after signing of the Accord, suppression and oppression, killings, rape and kidnapping against the indigenous women and girls continue to happen unabatedly as to this day.

Hence, in this backdrop, in the interest of establishment of equal status, equal rights and security of women in CHT including ensuring proper justice to the Kalpana Chakma kidnapping case and with an objective of proper resolution to the CHT crisis, PCMS and HWF placed their demands to the government as follows:

● Undertake immediate measure to arrest the culprits involved in Kalpana Chakma kidnapping and killers of Rupon, Sukesh and Samar Bijoy Chakma and bring them under trial with exemplary punishment;

● Immediately implement the CHT Accord properly and fully to resolve the CHT crisis including ascertainment of social security and advancement of the Jumma women society.