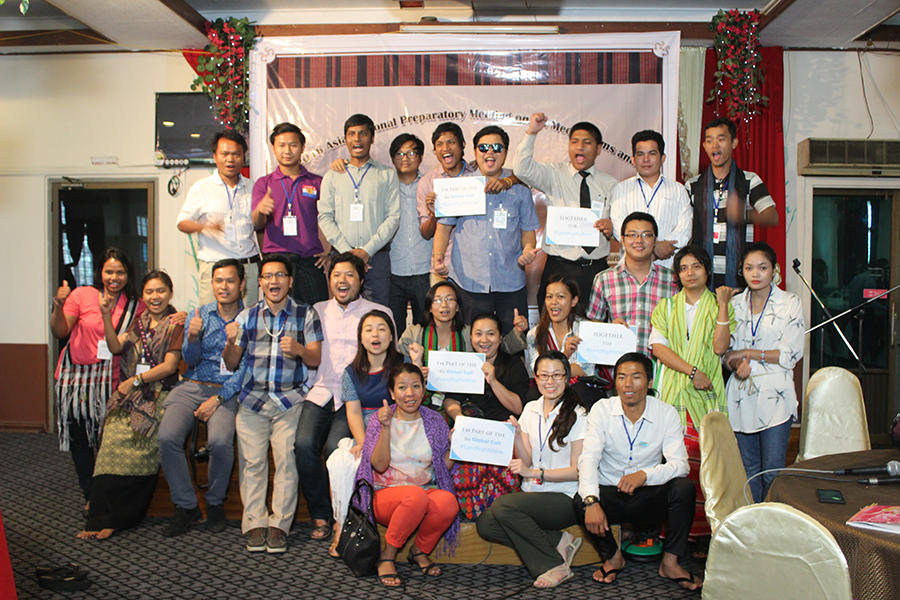 On 12 March 2016, indigenous peoples from different areas in Asia came together in Yangon, Myanmar and unanimously decided to join the global campaign to demand their land rights, also known as the Global Call to Action on Indigenous and Community Land Rights Campaign.

Around 60 indigenous representatives from 12 countries, namely Thailand, Cambodia, Indonesia, Vietnam, Japan, Taiwan/China, India, Bangladesh, Myanmar, Nepal, Malaysia and the Philippines, were participating in the Asia Regional Preparatory Meeting on UN Mechanisms and Procedures Relating to Indigenous Peoples organized by AIPP and its member and partner organizations in Myanmar, where they have jointly launched the Campaign at the regional level in Asia.

On this occasion, the participants including representatives of indigenous women and youth as well as indigenous persons with disabilities also expressed their strong commitment to demand together their collective land rights as enshrined in the UN Declaration on the Rights of Indigenous Peoples (UNDRIP).

Prior to the regional launch of the campaign, indigenous representatives have also shared concrete situations, concerns and issues over their land rights at the aforementioned meeting re-affirming the importance and necessity for more action such as this campaign. Following the launch, national level action plans were developed by the indigenous representatives from respected countries with the aim to double the area of the land legally recognized as owned and controlled by indigenous peoples in Asia.

At the national launch in Malaysia on 2nd March, the Jaringan Orang Asal Semalaysia (JOAS) also announced the plan to map out and consolidate Orang Asal territories in conjunction with the campaign. Jannie Lasimbang, Secretary General of JOAS, who also participated in the preparatory meeting, explained “Securing our collective land rights is critical because land rights for indigenous peoples in Malaysia is not just an issue of livelihoods. Our traditional land is vital for our survival. It is the source of our identity and culture.”

“We call on all indigenous organisations and networks to support this Global Call because securing indigenous peoples collective land rights is the key to ensure our food security”, said Naw Ei Ei Min, Director of Promotion of Indigenous and Nature Together (POINT), Myanmar, which was one of the local hosts of the meeting.

Since 2 March, the campaign has been already launched nationally by the indigenous organizations and networks in Malaysia, Myanmar and Cambodia, while the launch in Thailand is scheduled to take place at the end of March 2016. A number of similar launch events will follow in more countries in Asia.

For more information on the Global Call to Action on Indigenous and Community Land Rights, please visit http://www.landrightsnow.org/en/home/